ELEGY TO A GREAT LADY 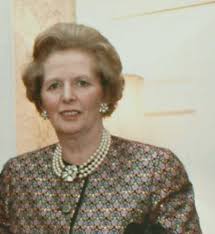 Freedom is in mourning. Mrs. Margaret Hilda Thatcher, Baroness Thatcher, the Iron Lady, died today, at 87 years of age. She was the Prime Minister of the United Kingdom from 1979 to 1990 and the Leader of the Conservative Party from 1975 to 1990. She was the longest-serving British Prime Minister of the 20th Century, and was the only woman to have held the post. And she became known as the Iron Lady for her leadership and perseverance in the ideals in which she believed. But her great capacity was not merely to being a woman, but a woman of righteous character.

Her thinking was strongly marked by the Institute of Economic Affairs (IEA), a think-tank headquartered in London and founded in the middle 50s, with the mission to improve a fundamental understanding of the institutions of a free society, by expounding the role of markets in solving economic and social problems. Instead of the political and parliamentary career that the founder of IEA, Antony Fisher, intended to follow to try to prevent the spread of socialism and central planning, Friedrich Hayek suggested him the establishment of a body which could engage in research and reach intellectuals with reasoned arguments. If the intellectuals - Hayek knew that - could be convinced of the benefits of free-markets, the politicians would follow them. As we can see, the IEA is an institution with the same spirit of the Mises Institutes scattered around the world today.

At that time, the young Margaret, originally a chemisty, was delighted with the ideas of Hayek and other champions of individual freedoms, as James Buchanan, Gary Becker, George Stigler, Douglass North, Ronald Coase, Milton Friedman and others. I think her greatest quality was never to have abandoned his belief in the free market, even when she took over the top job within the hierarchy of UK. In fact, it is virtually impossible to find a politician who, on assuming power, stands firm in his own convictions, even displeasing to many people. My great admiration for Mrs.Thatcher is due to this strength of character.

As Prime Minister, she introduced a series of political and economic initiatives to reverse the Britain's national decline, all of which are supported by the Austrian Economics. Her political philosophy and economic policies emphasized deregulation, more flexibility in the labor markets, the privatization of state companies, and the contention of the power and influence of the  of trade unions. Thatcher's popularity fell during her first years in office, period in which unemployment and the recession have increased because of the adjustments needed, until economic recovery and the 1982 Falklands War brought a resurgence of support, resulting in her re-election in 1983.

She was re-elected for a third term in 1987, but her "poll tax" was widely unpopular and her views on the European Community were not shared by others in her Cabinet.

Today, we can easily see how her vision of the European Community was correct, but the politicians from his own party, thinking only in the short term, could not understand. Her exemplary firmness of character made her resign from office, but never to her convictions.

Like any of us, the Iron Lady was not perfect, but it was without doubt that she was one of the bravest women that the UK has had in its long history and also one of the most remarkable persons worldwide.

Rest in Peace, Iron Lady. You were an example of strength of character, tenacity, courage and vision for those who love individual freedoms. People like you know that only ideas can improve the world. You did your job very well. May God receive you in His glory!